The church of the Nativity (Arkaia)

The village of Arkaia is located at the boundaries of the neighbourhood of Salburua in the city of Vitoria-Gasteiz. Albeit it is still an independent town, it links the capital with the rural world. This small village is full of ancient historical remains. The humble archaeological site is worth mentioning, because it proves the existence of some thermae from the Roman period in Alava. Besides, we would like to remark the surviving Romanesque remains at the church of Nativity. Most of them are currently hidden, which means that the site was regularly populated over history. However, the medieval past is hidden with the 18th century Neoclassical renovations, which were directed by Justo Antonio de Olaguibel, one of the best local architects of that period.

The thermae of Arkaia arose from the side of the Iter XXXIV Roman road, which crossed the Llanada connecting Bordeaux with Astorga. The complex was built in order to address the needs of its travellers and traders. These thermae were finished around the end of the 1st century and abandoned about fifty years later for unknown reasons. Despite their antiquity, we still find diverse spaces: a changing room (apodyterium), a cold room (frigidarium), a warm room (tepidarium), a hot room (caldarium) and a courtyard or palaestra where people exercised. On the floor of the tepidarium, we preserve the small columns that held the floor. They were part of the heating system (hipocaustum) that warmed the room with hot air that circulated through platforms and empty walls. 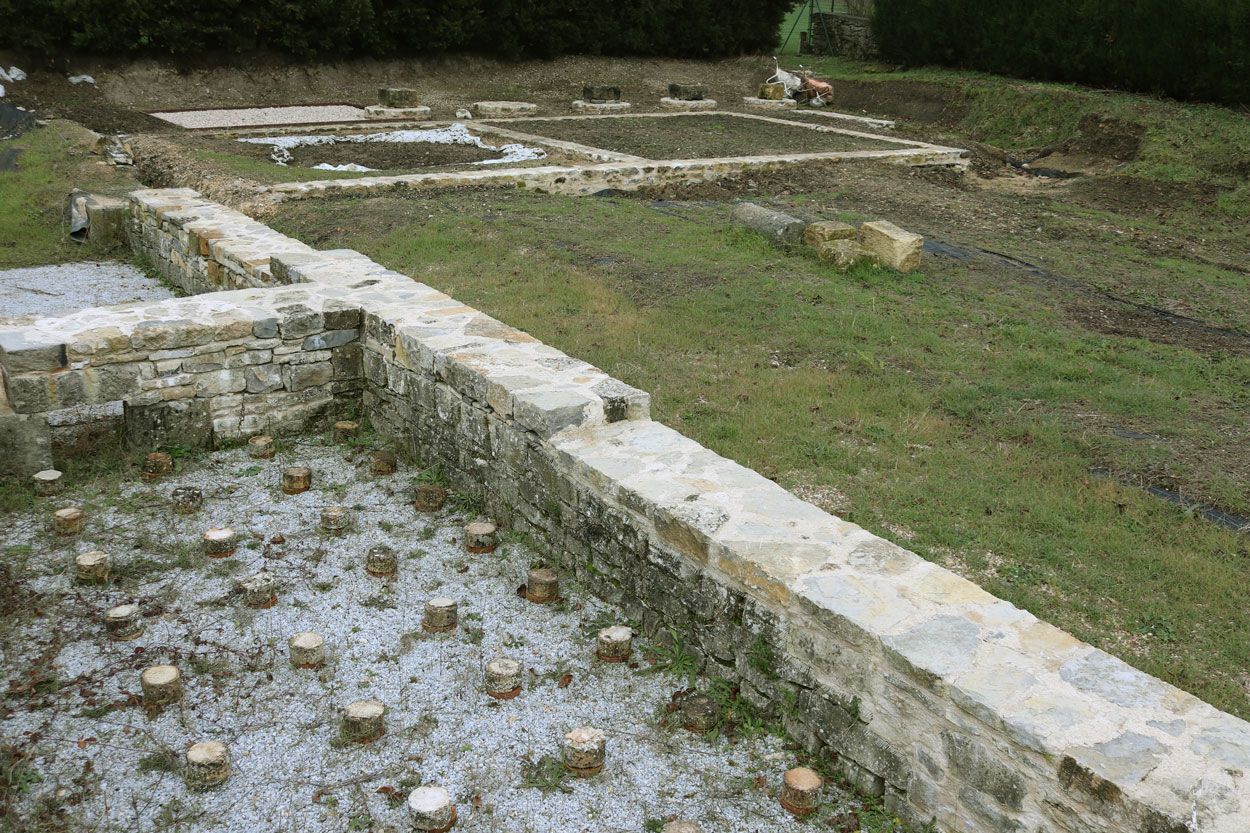 The preserved old images reveal the modifications the church has been into these last decades. Indeed, its current appearance is a consequence of the deep renovations from the 18th century. Overall, we find three important phases. We still have some exterior remains on both north and west walls from the first Romanesque facet, like the corbels and carved pieces that were reused in later expansions. Besides, the Romanesque nave, which today looks very transformed, was hidden during the Modern Ages. One of the most remarkable modifications was the construction of the current parish with a nearly new ground plan. However, the nave is usually the meeting place for the inhabitants of Arkaia. Finally, in the 18th century, the portico was rebuilt with the maestreo technique. It consisted of hiding elements from other styles with cornices and entablatures to unify the church under the Neoclassical standards. 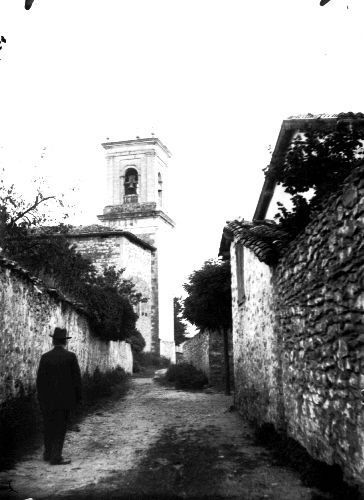 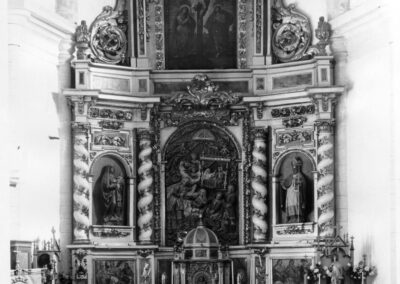 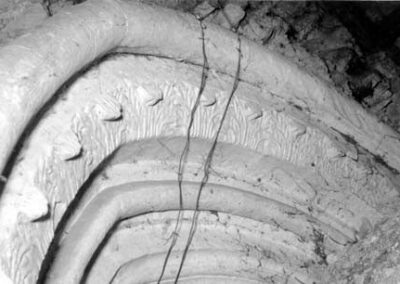 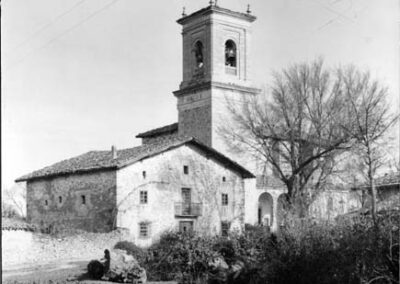 The church of the Nativity

A few metres away from the Roman thermae, which are the oldest remains of the town of Arkaia, we spot the parochial church of the Nativity. Its Romanesque remains are generously scattered along the building, although sometimes they are veiled. Like that, we can approach a general idea of the temple’s medieval appearance. The shape of the primitive nave of the church can be deduced from its northern side, where a line of corbels with their original dimensions is distinguished. 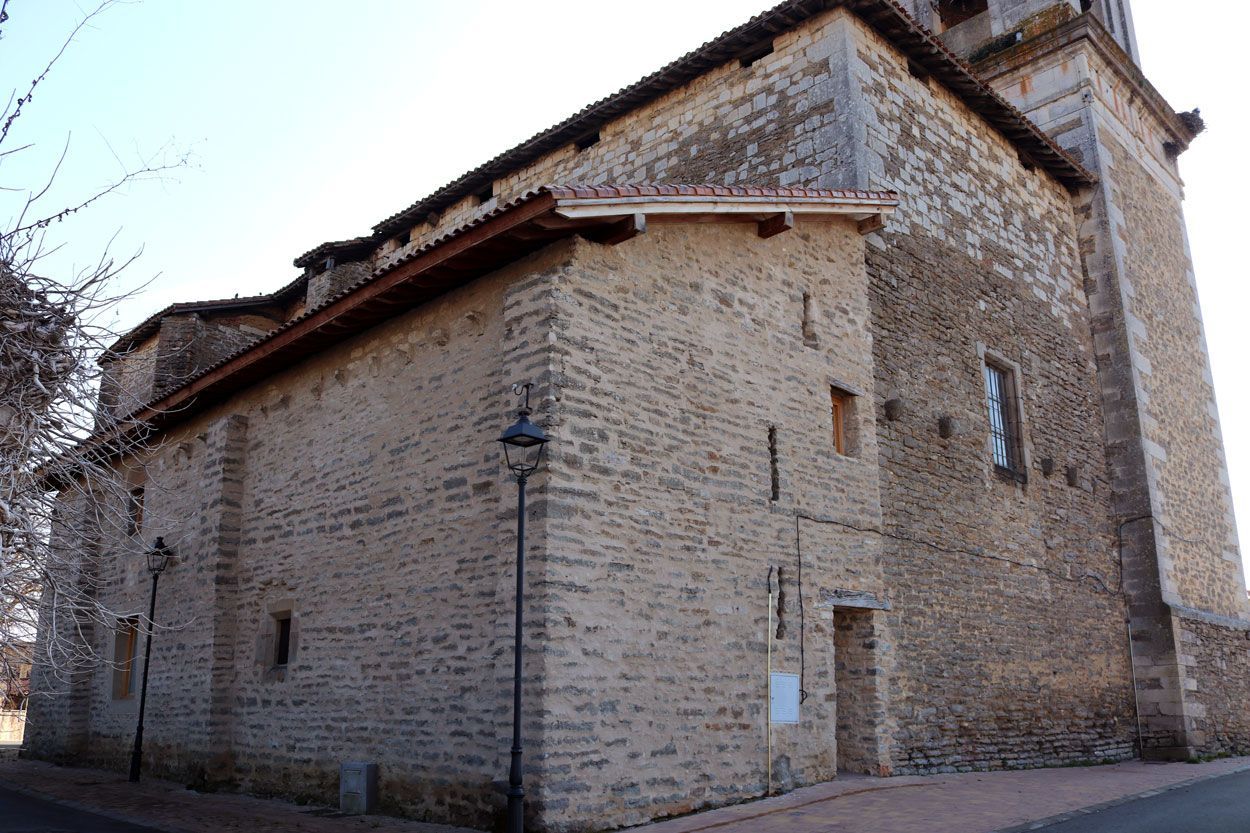 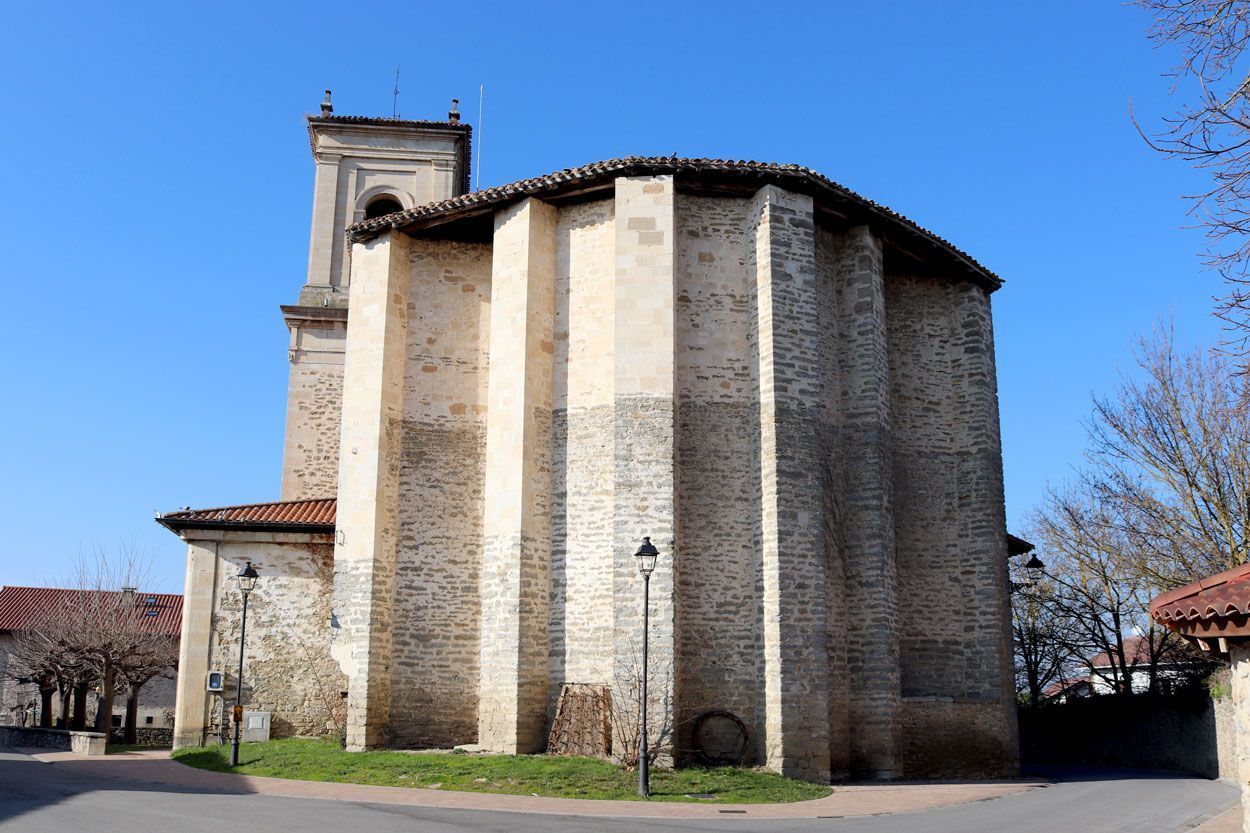 The primitive façade remains between the walls of the church of the Nativity of Arkaia. Once the Renaissance renovation was accomplished, the volume of the church changed, and the façade was relocated. Although it cannot be spotted from outside, the façade continues at the same place of the portico’s current entrance. Besides, the access stairs to the tower show the false ceiling created along the 18th century façade. Apart from that, its archivolts with acanthus leaves motifs still endure. In that same access, the original Romanesque capitals with vegetal decoration are displayed. 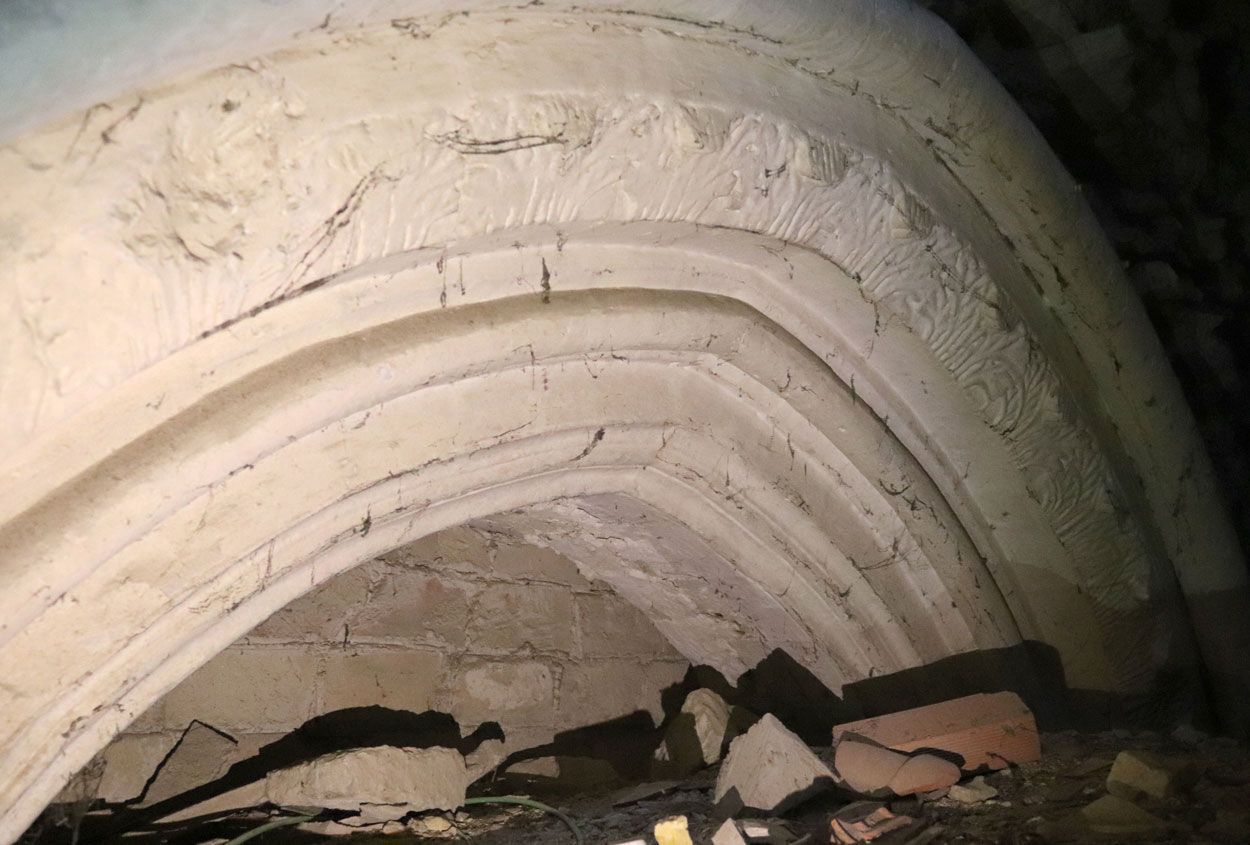 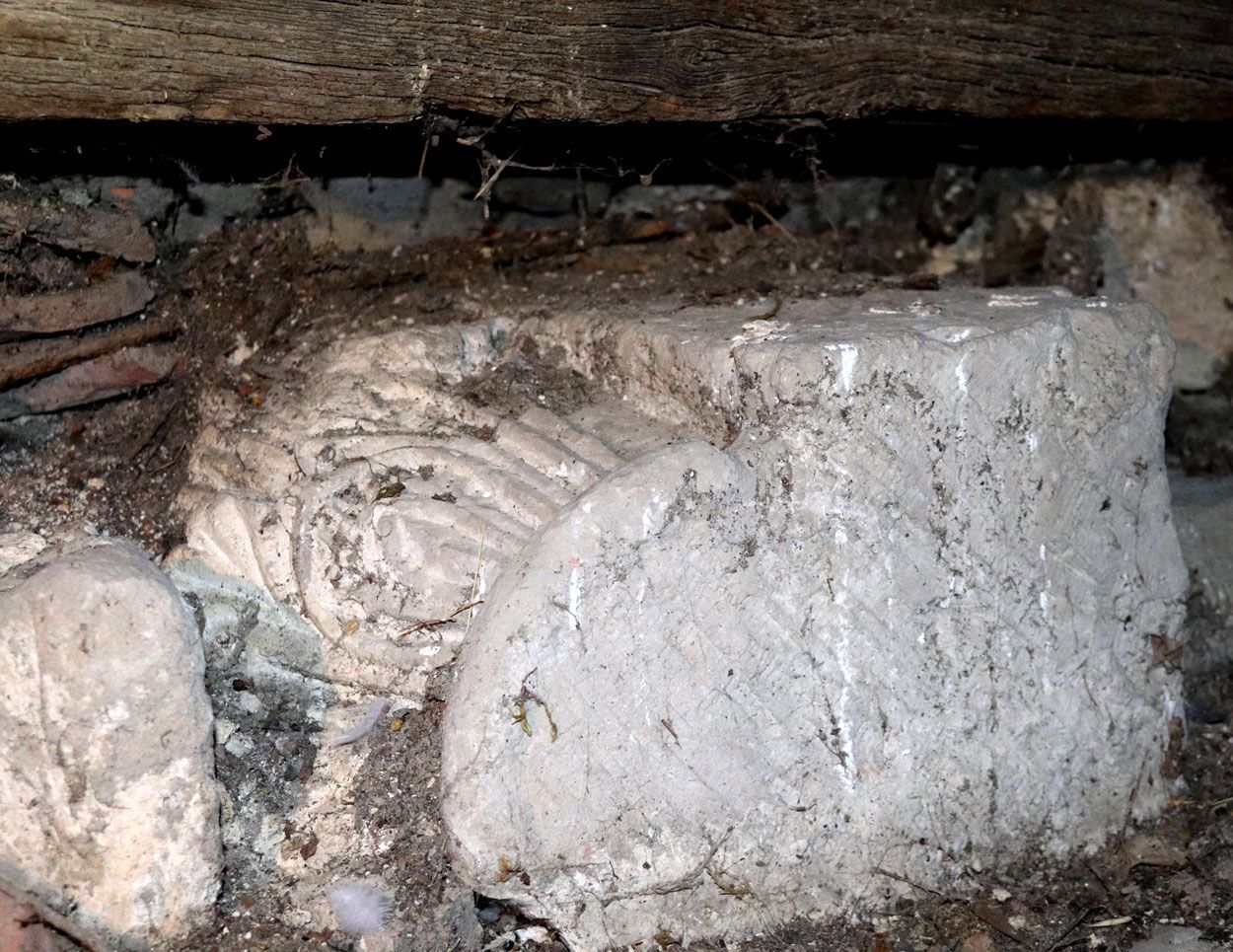 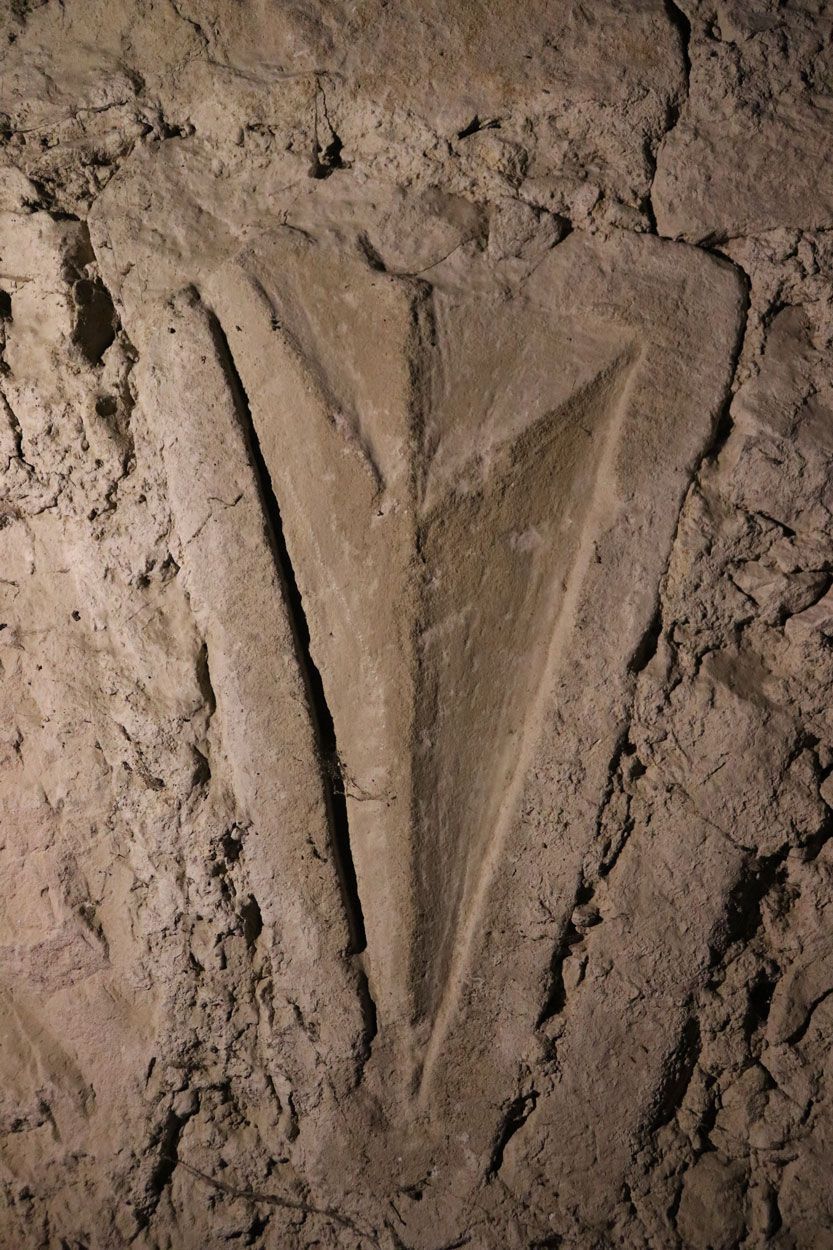 Nevertheless, one of the most significant jewels from the Romanesque temple is its baptismal font, which can be easily spotted inside. The cup shows geometrical motifs with a clear Roman influence like the fretwork of intertwined circles and, inside, some projecting eight-pointed stars and a circular pattern. Flanking the central decoration, more geometrical elements are displayed in the upper and lower stripes. At the back, there is no decoration, perhaps because it was against the wall. 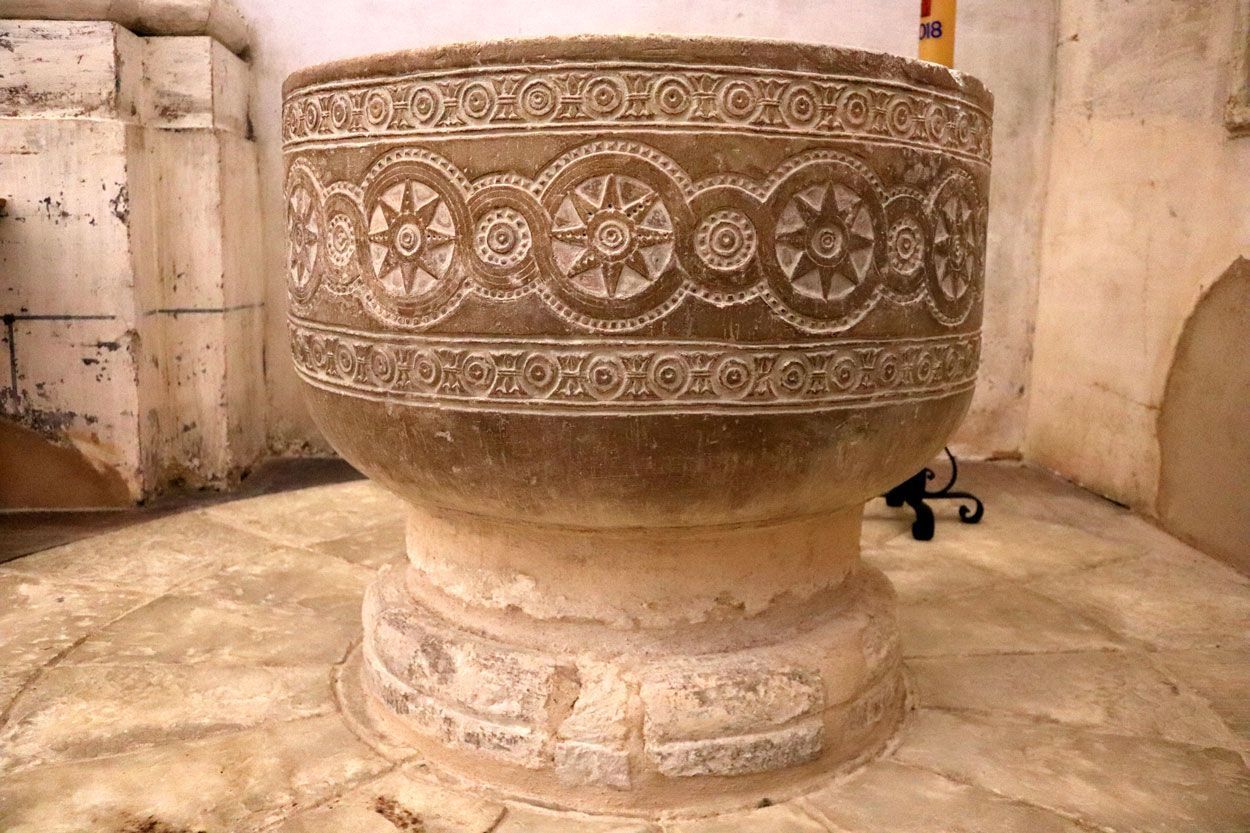 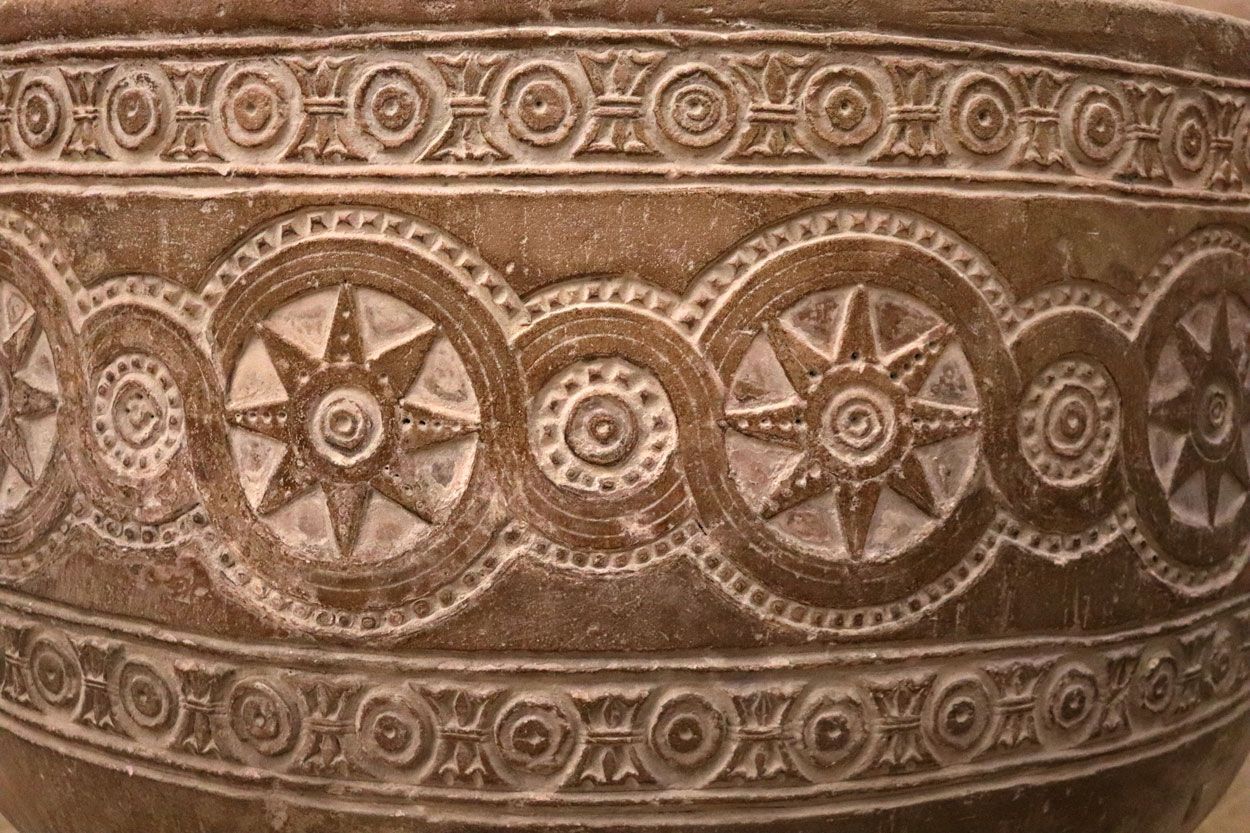 In the 16th century, the building was entirely redesigned according to the Gothic style of the area. Therefore, the new temple was attached to the southern wall of the Romanesque church. Besides, they created the polygonal apse and the nave with a transept, which was covered in two different phases. The part of the apse has some complicated Renaissance vaults with geometrical foral and star motifs on the ribs. Towards the foot of the church, we spot groin vaults that are more likely to be found in the Baroque period. 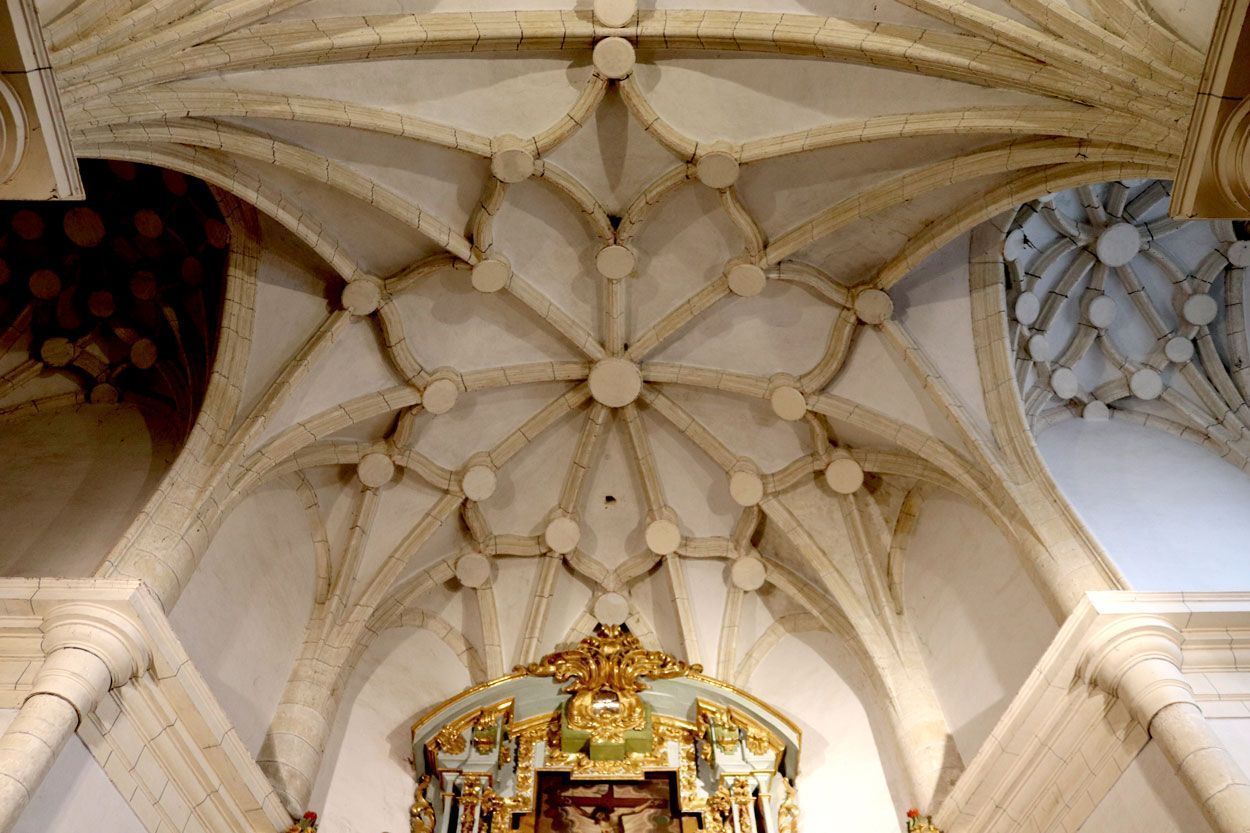 Justo Antonio de Olaguibel (Vitoria-Gasteiz, 1752-1818) is known as one of the best Spanish Neoclassical architects. He was the one in charge of designing the maestreo of the church of the Nativity of Arkaia. For example, Olaguibel designed the rigid entablature that crosses the entire building as a cornice. Another remarkable element is the ensemble of classical columns and pilasters that hold the cornice, hiding the Gothic capitals from which the vault ribs start. Following the Neoclassical taste of the time, the building gets a much more sober appearance. 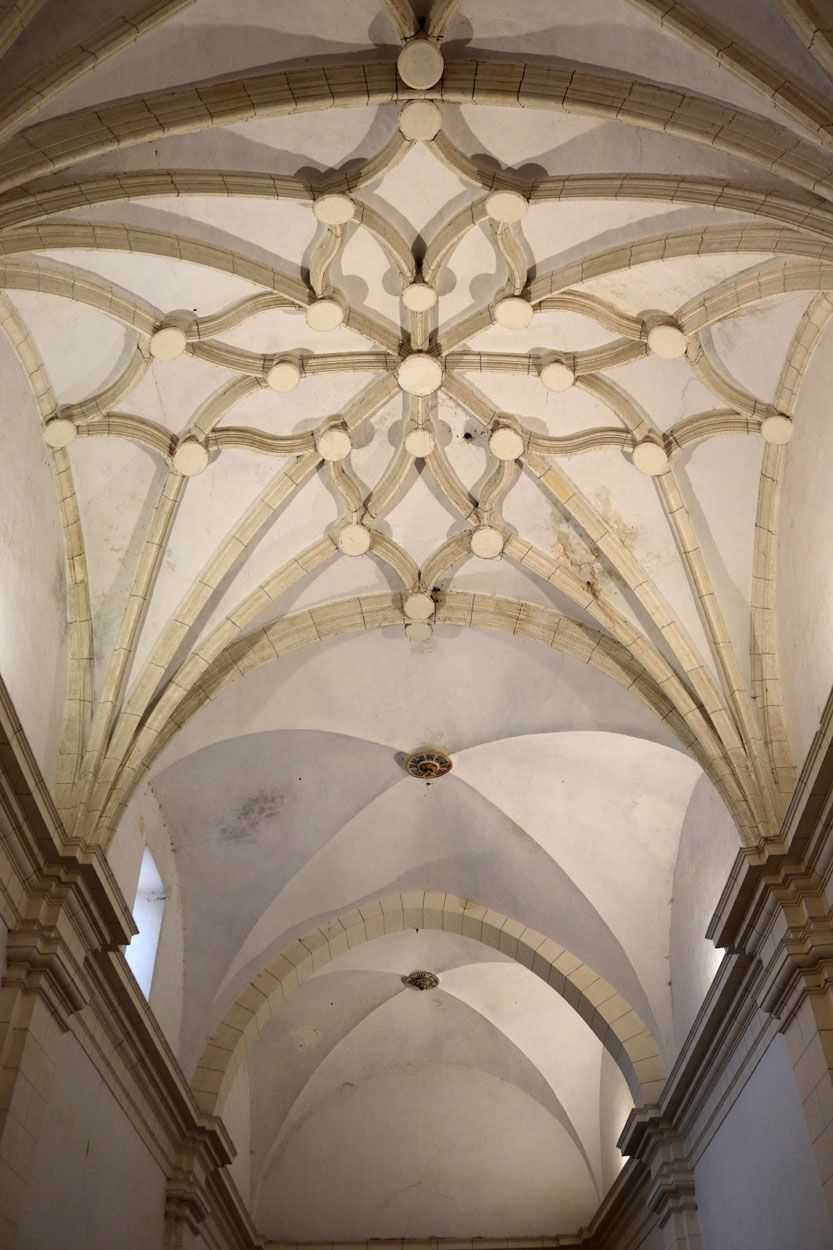 The altarpieces are from the same century, and we find a mix of Baroque motifs impregnated with the latest Neoclassical breeze. At the main altarpiece’s bank, we notice two canvases of: Saint Peter, Saint Michael, and Saint John the Baptist (left) and Saint Catherine, Saint Pelagius, and Saint Vítor (right). Both paintings have a very similar inscription that remembers the six lost medieval hermitages that were in the surroundings of Arkaia, which were dedicated to the represented saints. 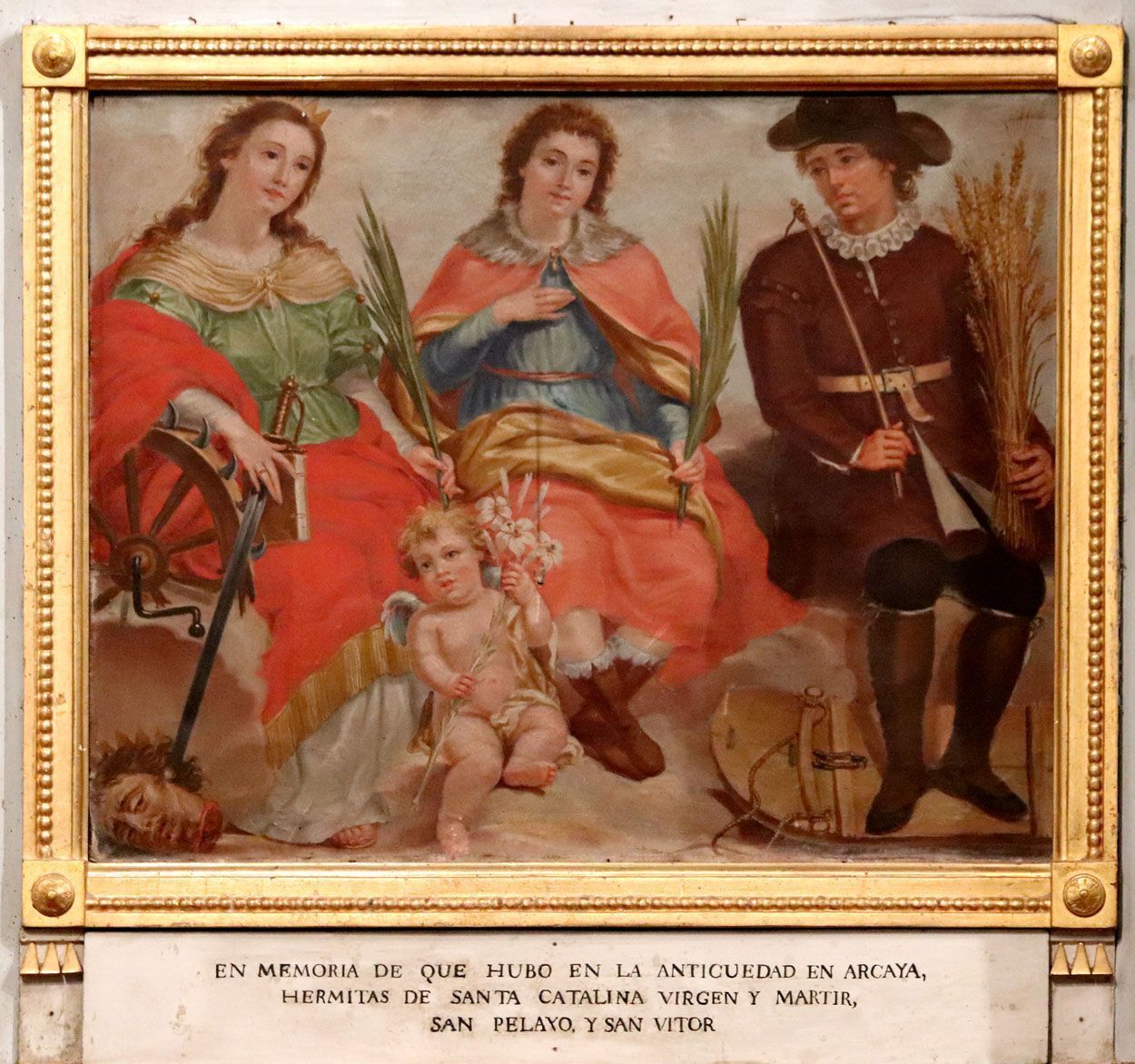 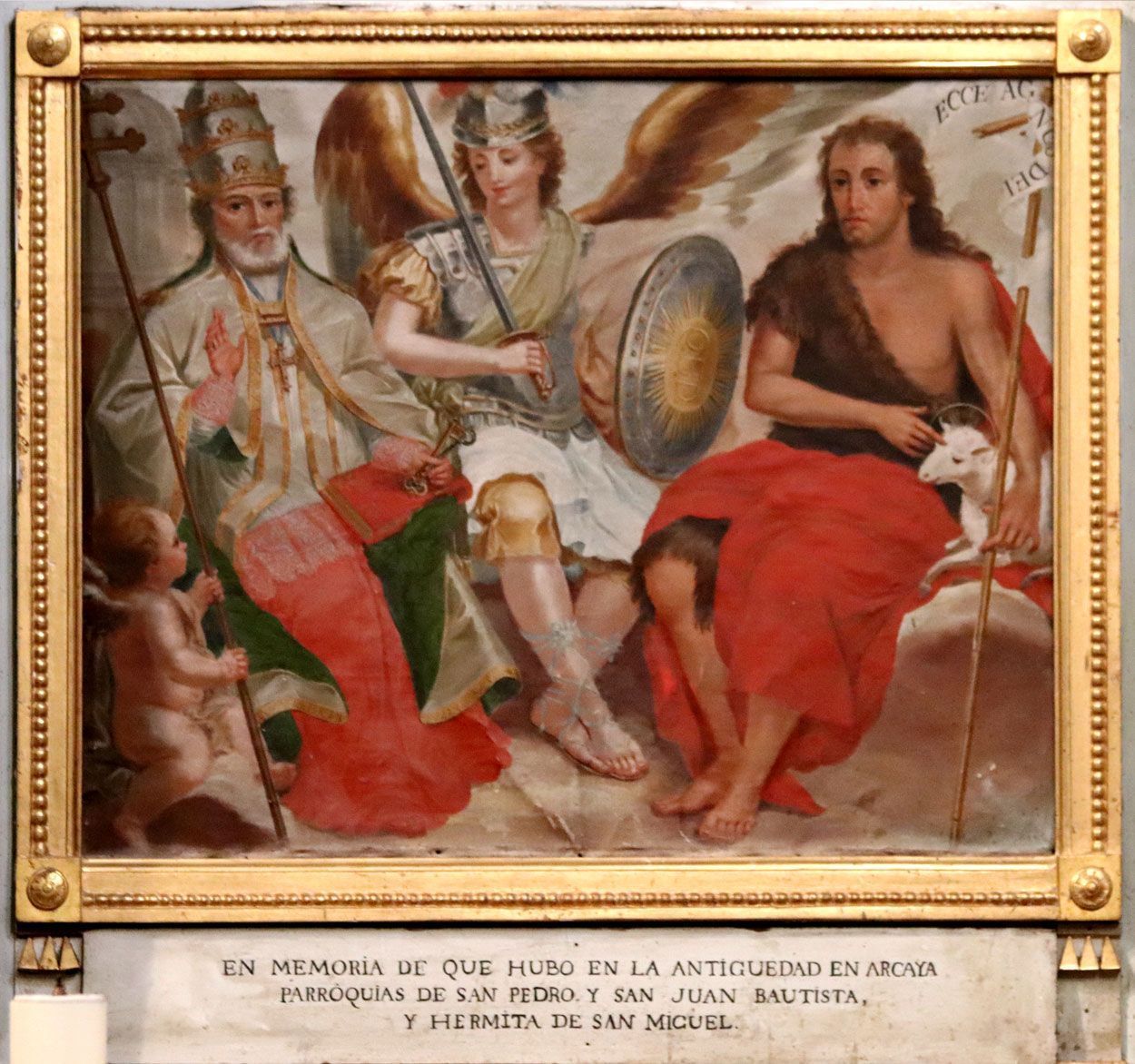 Over the tabernacle, we find a relief of the Nativity of Mary. In the scene, flanked by angels, Saint Anne is giving birth to Mary with the help of several midwifes. Meanwhile, Saint Joachim witnesses the moment in the background. A Baroque curtain frames the representation, giving dynamism to the clashing composition. Besides, the carvings from the side naves are a previous depiction of the Virgin and a Saint Eugenius dressed as a bishop with a two-barred cross. Finally, the altarpiece is crowned with a painting of the Calvary. 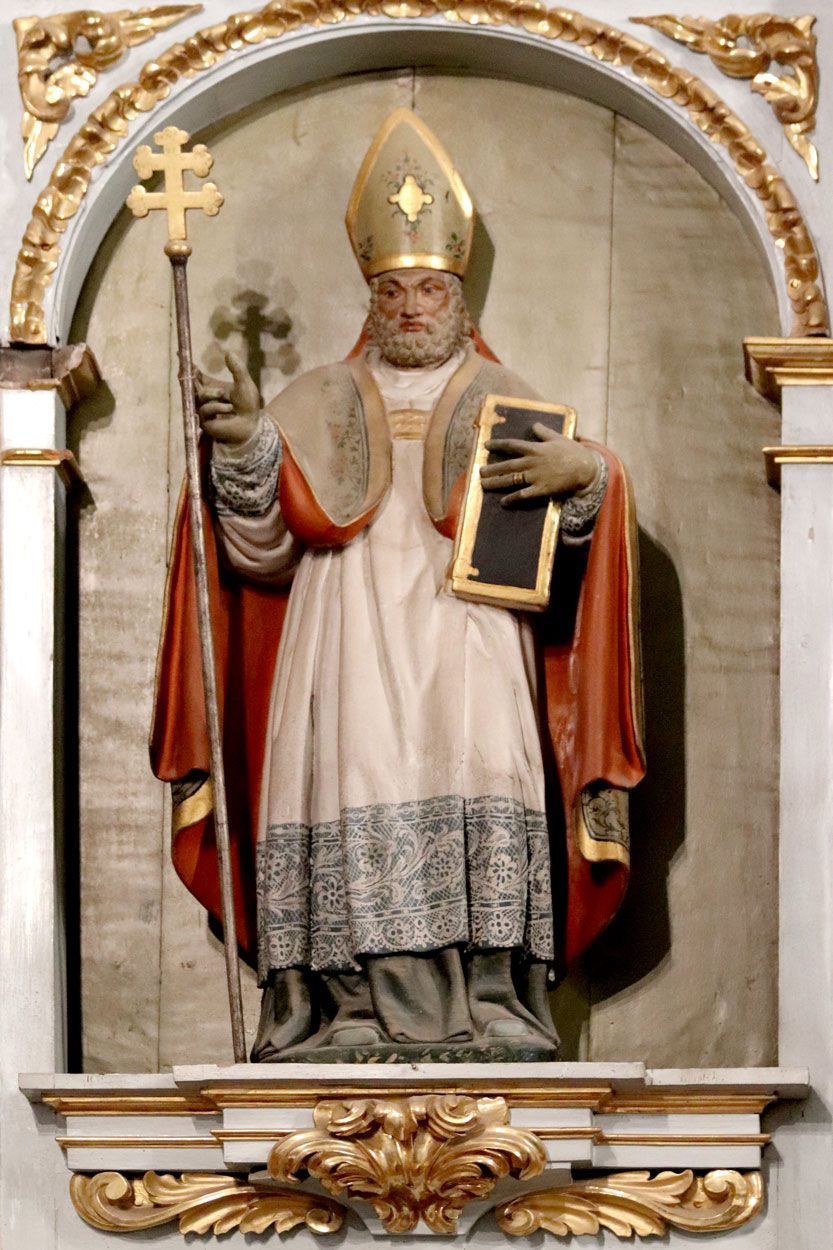 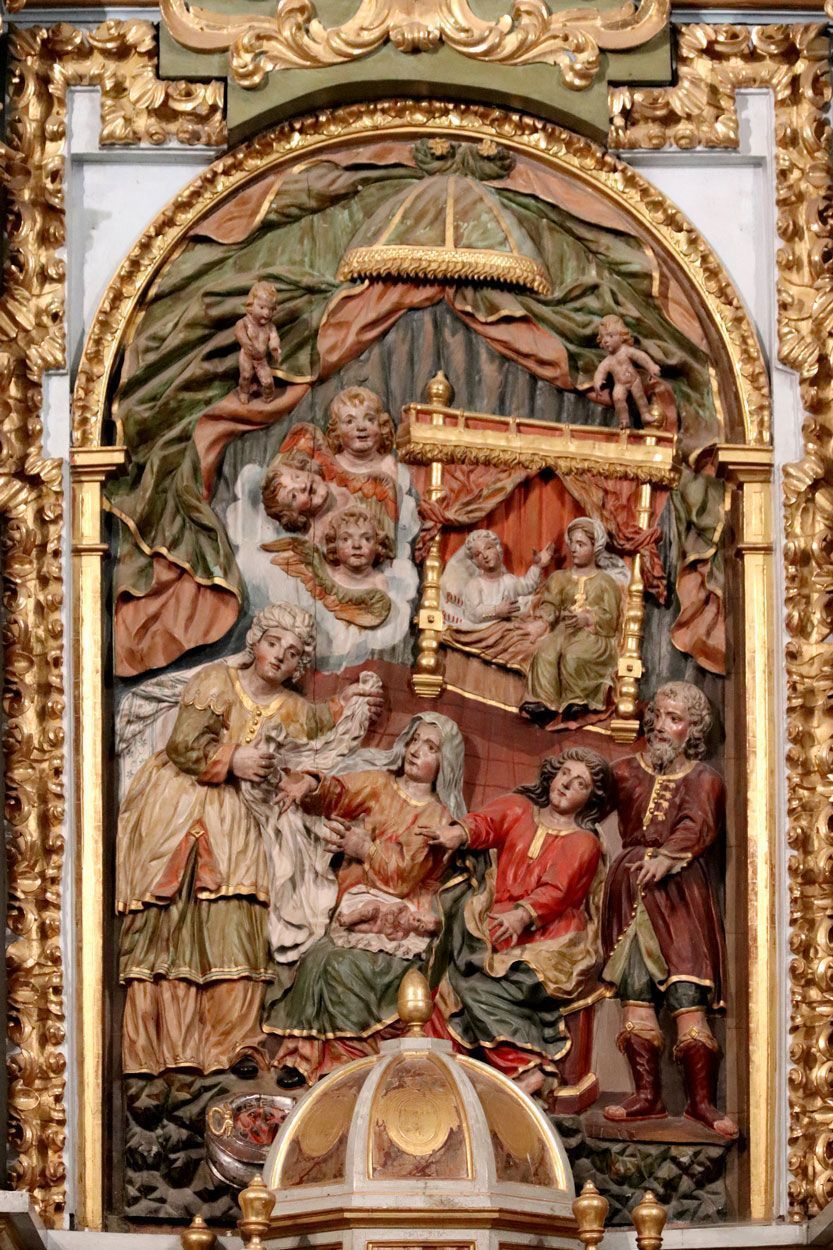 The figures of the lateral altarpieces were made by members of the two most outstanding dynasties of sculptors during the Neoclassicism in Alava: the Valdiviesos. Their carvings represent Saint Joseph with the Child and the Lady of the Rosary along with other smaller figures. 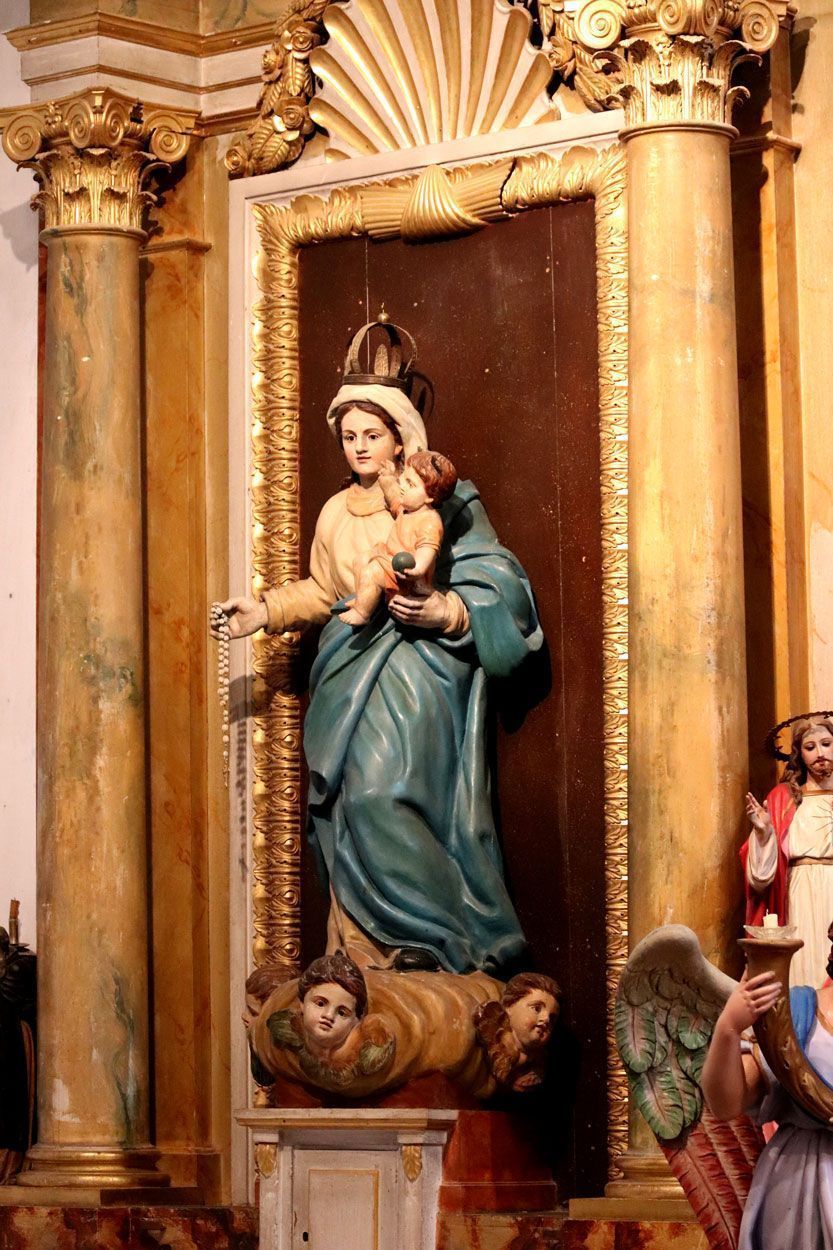