Church of Our Lady of the Assumption (Lasarte)

A pleasant walk or ride leads from Vitoria-Gasteiz to the council of Lasarte. Once there, an imposing church announces that we in a town full of history. According to the “Reja de San Millán” (1025), Lassarte paid three rejas, the maximum amount that appears in this writing. Therefore, we can determine that, at that period, Lassarte had enough population and important families to pay those tributes. Thus, at the end of the 13th century, the village was donated by King Sancho IV of Castile to the town of Vitoria. Even then, the village continued being a relevant location. For example, the Junta de Caballeros e Infanzones had its headquarters in Lasarte. The church, as we will see, has Romanesque remains (12th-13th centuries), as well as remnants from the Modern Ages. Nevertheless, the building has been through many modification processes, being the most important the one from the beginning of the 16th century.

The large window of the apostolate

One panel from the polygonal apse shows one of the richest and most beautiful windows of the peninsular Romanesque. This extraordinary artwork only has another parallel case in Alava in the church of Armentia. In fact, some experts believe that the large window comes from the basilica of Armentia, as it shows a very similar style to the last workshop that worked in the collegiate church. Indeed, in the end of the 18th century, the temple was in ruins, so many pieces were dispersed throughout Alava. Anyway, there are many theories, and even today it is difficult to determine if the large window of the apostolate was originally built for the Romanesque church of Lasarte or if it was removed from Armentia. However, considering the historical relevance of Lasarte, its temple would have a notable quality building.

The large window shows five archivolts decorated with great ornamental riches. The second archivolt starting from the outside, presents motifs with eggs and beads, which symbolizes the taste for the Classical Antiquity the workshop had. The apostles are distributed inside and outside, representing six on each side like column-statues. As they present generic attributes and their preservation status is not good, not all the images can be identified. According to experts, the first from the left could be Saint Paul (due to his baldness and the sign) and the figure next to him could be Saint Peter, who has beard and a large key on his hand. The decorations from inside are more damaged and were hidden until the last restorations in 1974. Perhaps, when the ensemble was mortared, Romanesque art was no more popular, and decided not to show it entirety.

In 1974, the church was restored under the direction of the architect Julio Herrero. During those deep restorations, the working team did great discoveries. Consulting the photographs from beginning of the 20th century of the Federico Baraibar & Lorenzo Elorza collection, we spot that the large window of the apostolate used to be flanked by two high-quality column-statues. Inside, a Neoclassical altarpiece covered the Romanesque large windows. In the restoration, it was removed because it was considered of little artistic value. In order to achieve a more harmonious interior and avoid the deterioration of the figures, the column-statues were relocated in the church. The photographs also show that the Romanesque façade was originally painted with layers of uncertain chronology but, like in other temples, the polychromy was removed in recent interventions. 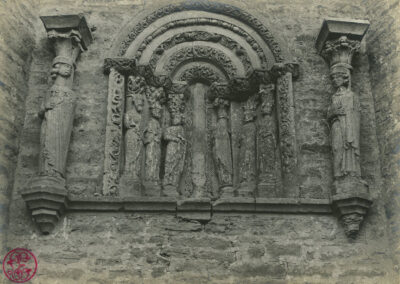 Next to the previously mentioned large window with the apostolate, another Romanesque window can be distinguished on the southern wall. In this case, it has a double archivolt richly decorated with vegetal motifs and a relieving arch with scrolls. Under some cyma also full of lush vegetation, we find some interesting capitals. The outer capital on the right side is the most remarkable, decorated with stylized Gothic cardinas that rotate framing a pineapple hanging from the central corner.

The exterior of the building is slender and elevated, some common characteristics from the churches between the late 15th and early 16th centuries. 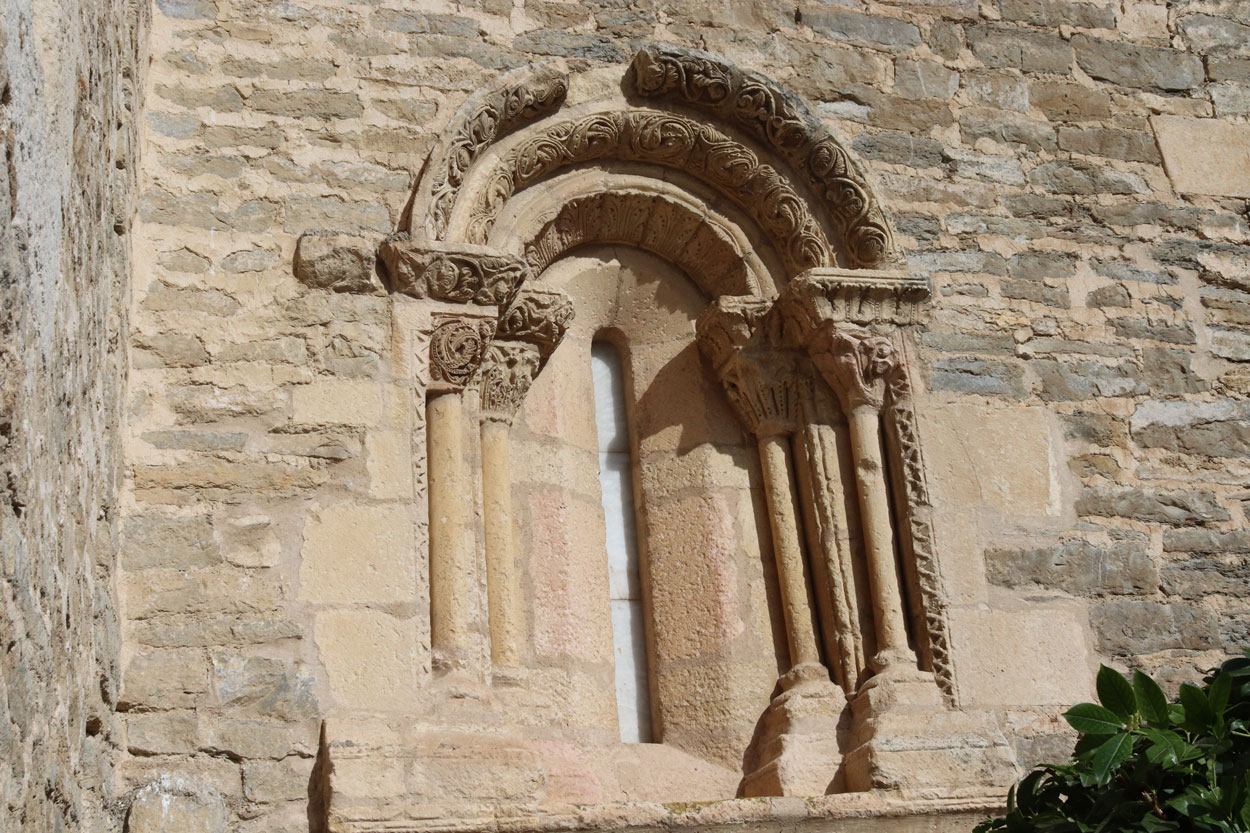 Going through the great portico that flanks the southern side, we spot the entrance to the temple: a sober and simple façade from the end of the 11th or the beginning of the 12th century. However, it has no relation with the workshops of the large windows. Indeed, this change of workshop is no surprise at all, as it is very common in the Romanesque from Alava. Three of the four archivolts that compose the façade are smooth, without sculptural decoration, and the last of them has a chain of little volume. The relieving arch is partially damaged, but we still preserve its successive half balls. Finally, the columns that follow one another on both sides of the façade end with some extremely simple capitals full of faces with typical headdresses and hairstyles of that period. 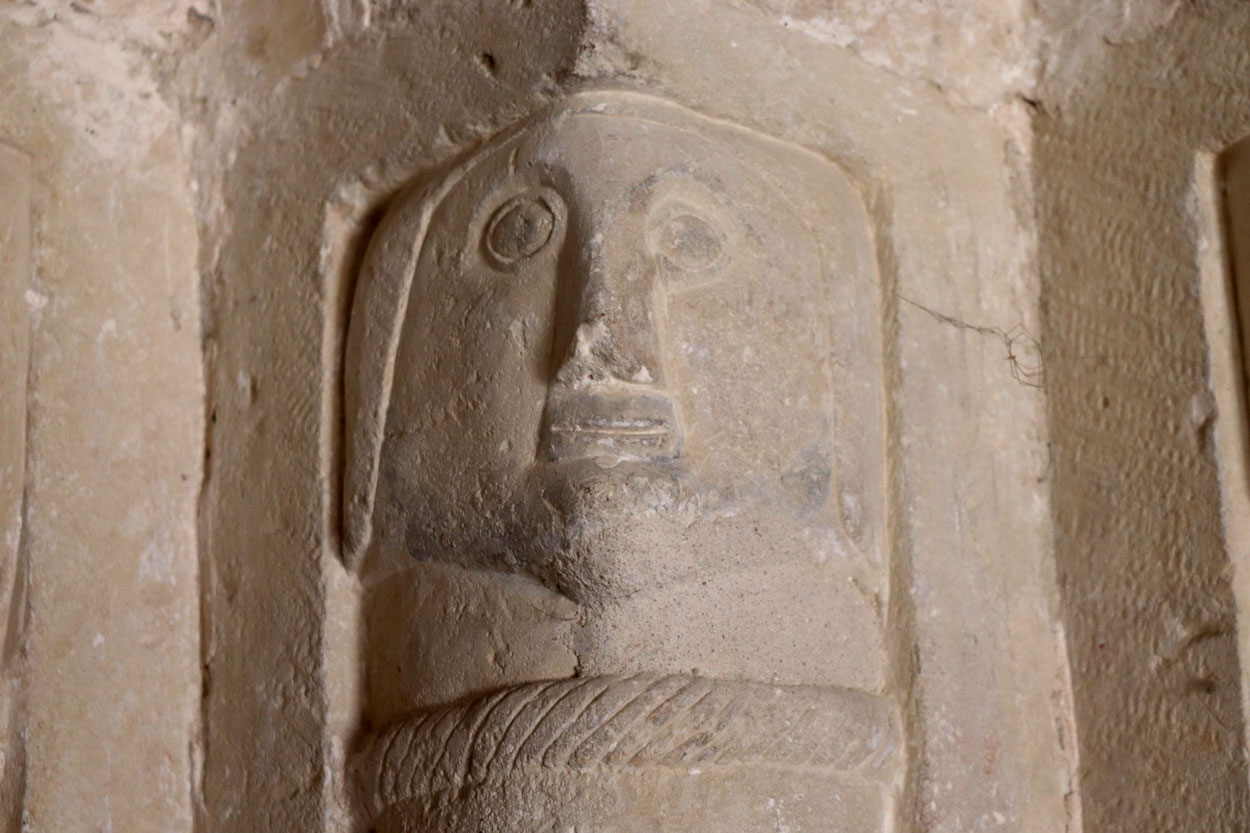 Inside, magnificent gothic profile vaults dominate the view. According to the apse’s inscription in Gothic letters, the building was completed in 1511 under the boost of “Martiniz Abad”. The church of Our Lady of the Assumption presents a wide hall plan illuminated by large windows and Gothic oculi. Besides, the high-quality keystones are also from the beginning of the 16th century. The most remarkable keystones are the image of the Assumption of the Virgin and a scene of the Trinity. 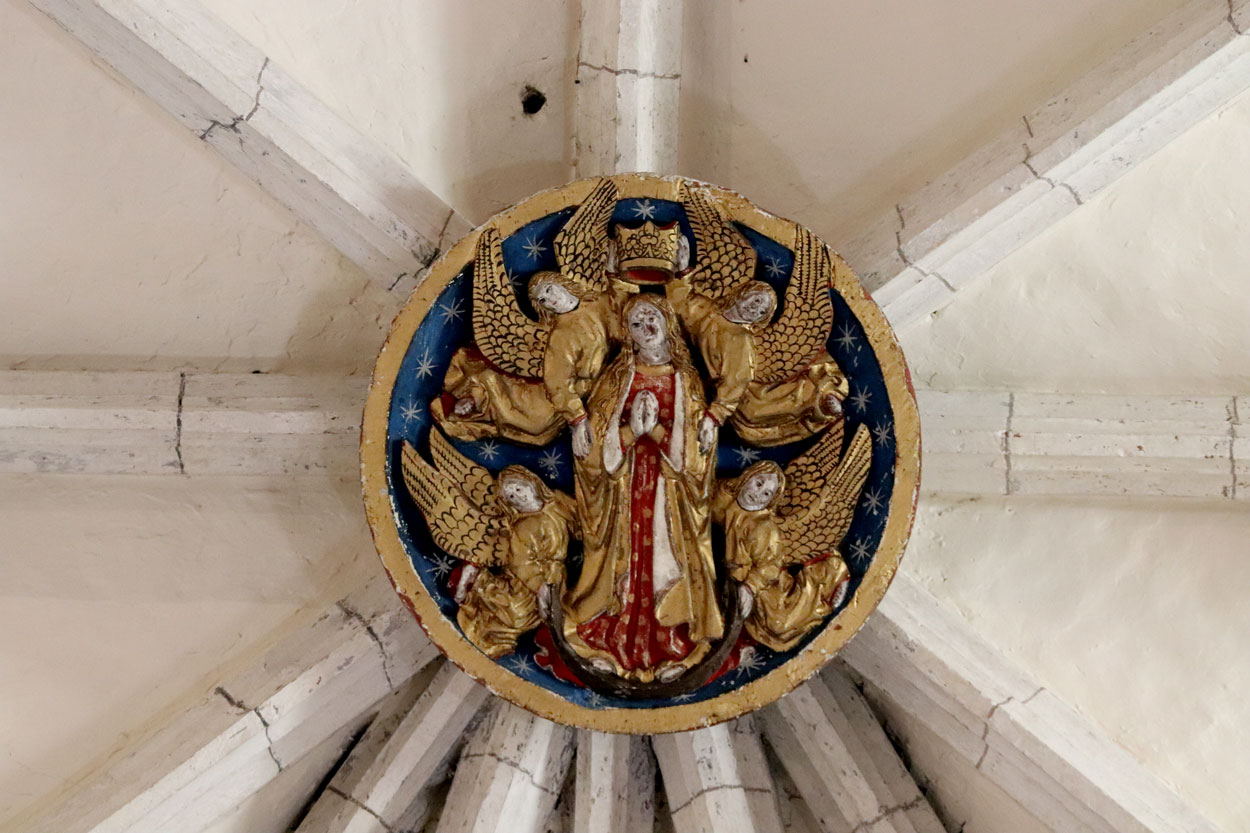 At the first section, the ribs of the spectacular vaults that cover the temple are square-shaped, whereas the presbitery’s vault is displayed in a half-star shape. In the beginning of the 19th century, the building underwent major changes with the maestreo process, and was unified under a Classicist standard.

At the back of the presbytery, we spot the relocated column-statues that were originally flanking the Romanesque large window from outside. In theory, these two figures represent the Annunciation, although there is another proposal that defends that the images are Moses and his brother Aaron.

The artistic wealth accumulated by the church of Lasarte can be easily appreciated in other pieces such as the interesting medieval baptismal font or the contemporary liturgical furniture made by the Basque artist Néstor Basterretxea. 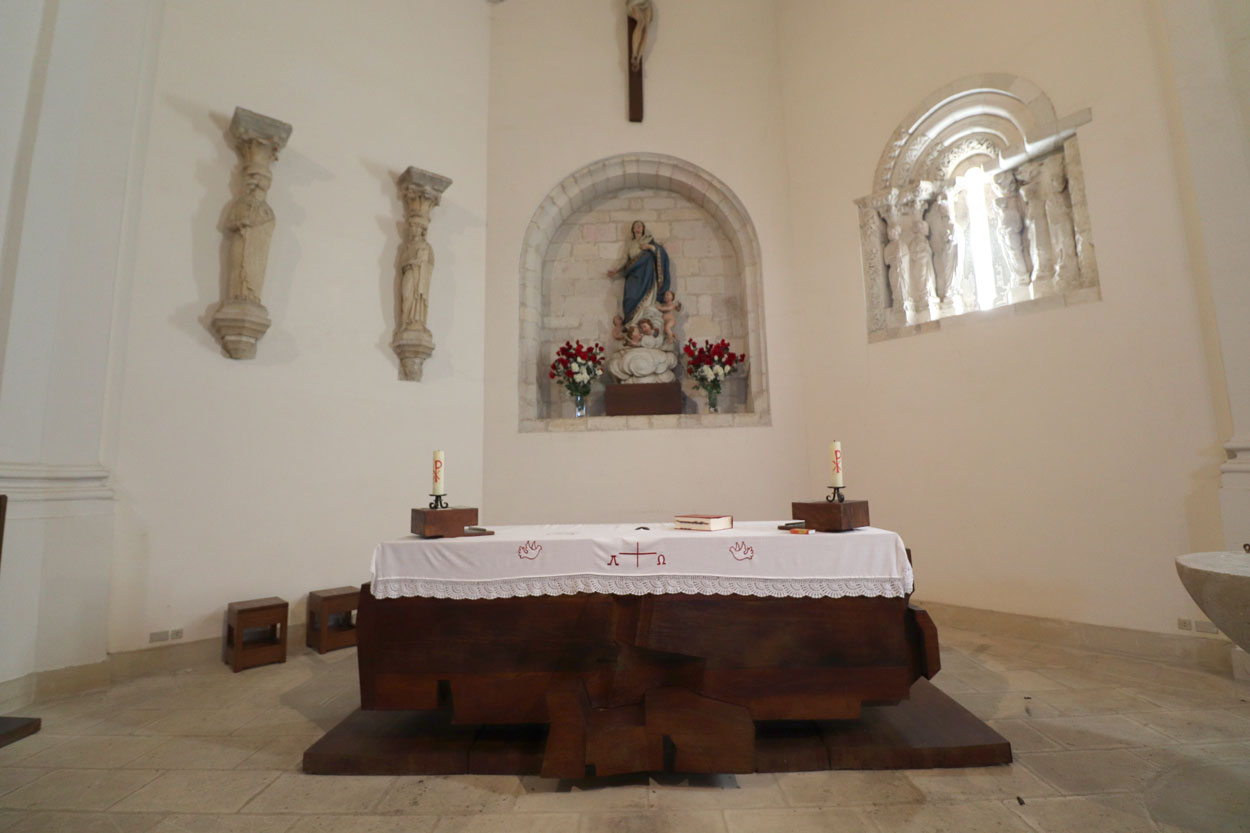